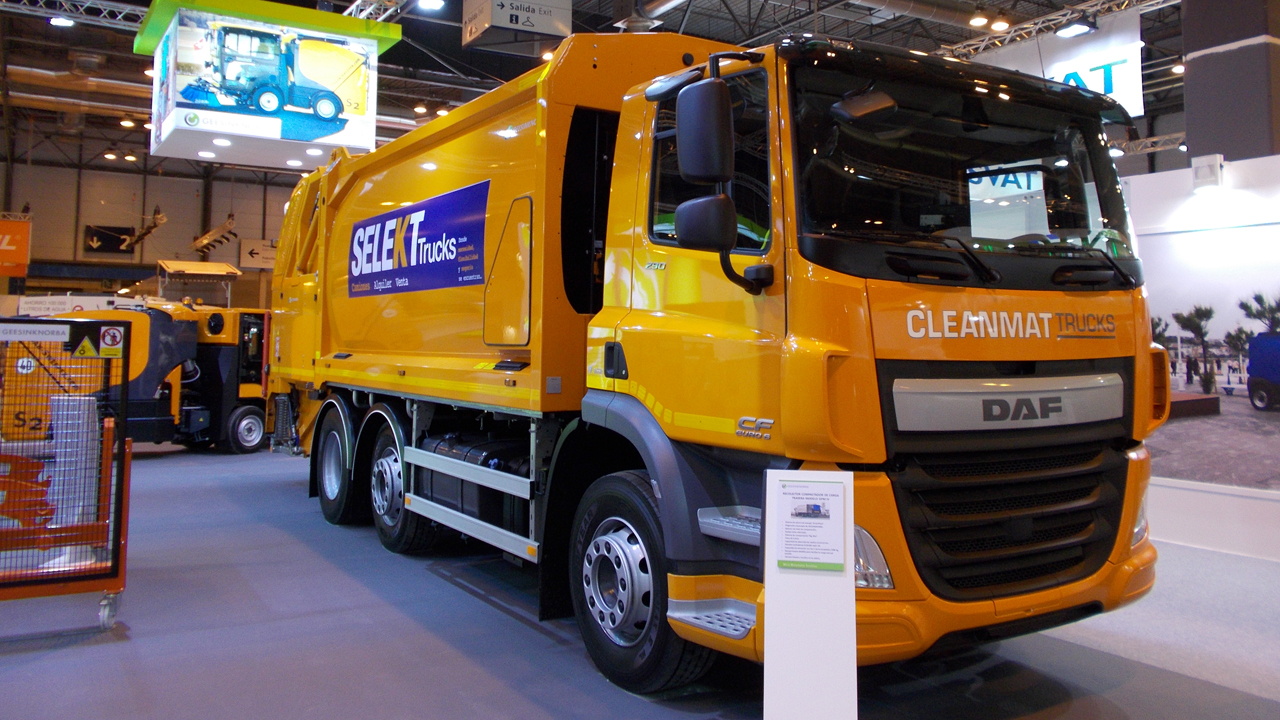 On display was a Geesinknorba GPM IV 20H25 rear loader of 20 cubic metres capacity. The unit was fitted with a GCB 1000 split lift with both DIN type trunnion arms DIN 30700 – and comb bar – DIN 30740 for the emptying of wheeled containers. It featured the SmartPack system which helps to improve the vehicle’s fuel consumption by 30%.

The GPM IV 20H25 unit was mounted onto a DAF CF 290 Euro 6 6×2 three axle mid steer chassis of 25, 500kgs GVW. The chassis also featured the Allison 3000 Series automatic transmission to reduce driver fatigue in the stop start operations involved with waste collection. The vehicle has been sold to SELEKT TRUCKS, a Spanish division of the Dutch-owned Cleanmat company and will be available for short, medium or long term hire to municipalities and private contractors across Spain for collecting municipal, commercial and industrial wastes.

The Rossi R200 waste collection vehicle has been mounted onto an Isuzu NQR Euro 6 7.5 tonne 4×2 two axle chassis complete with the Isuzu NEES 2 Easyshift semi – automatic transmission. The R200 unit is ideal for collecting waste and recyclables in narrow streets in Spanish towns and cities.

An AMS CL1 – 24N side loader of 24 cubic metres capacity was also exhibited. This unit has the capability of emptying static type side loader containers of 2,200 and 3,200 litres capacities. It has been mounted onto an Iveco Stralis AD 330 Euro 6 6×2 rear steer three axle 26 tonne chassis complete with the Allison 3000 Series automatic transmission. The vehicle has been sold to the Empresa Publica Del Excmo – Ayuntamiento de Sagunto, a publicly-owned environmental services company serving the community of northern Valencia. The vehicle will collect both municipal and recyclable wastes.

A Kiggen PD1015 static compactor was also on display. This featured a comb/trunnion lifter for emptying 80–1100 litre wheeled containers compliant with DIN 30700 and DIN 30740 standards. The PD1015 compactor can handle a wide range of municipal, commercial and industrial wastes which the unit will compress into 20, 30, 35 and 40 cubic yard enclosed roll–on–off containers.

The unit clamps the containers to the compaction module for the loading of wastes to commence and uses the SmartPack system to complement the Smart Cities concept. The SmartPack system helps to improve the electrical efficiency of the unit when compressing waste so that only the required amount of energy is used when the compaction module is in operation.

Geesinknorba Spain have recently become agents across Spain for the Boschung range of small pavement and large truck mounted sweeping machines. On the stand at the Tem Tecma exhibition, a Boschung S2 articulated pavement sweeper was exhibited. It had a capacity of two cubic metres to contain litter and street sweeping debris. Its overall gross vehicle weight was 3,500kgs and it can carry a net payload of 1,500kgs. The S2 unit is ideal for street cleaning duties in Spanish towns and cities.

A Tecme Minilimp bin washer was another exhibit on the Geesinknorba Spain stand at the Tem Tecma exhibition. The Tecme range of bin washers has recently been added to the Geesinknorba Spain product range with the company becoming Spain’s national sales distributors for their product range. The unit exhibited had a water tank capacity of 2,600 litres and a comb/trunnion bin lifter fitted to handle wheeled containers from 80–1100 litres capacity compliant with DIN 30700 and DIN 30740 specifications. The bin washer was mounted onto an Isuzu NQR Euro 6 7.5 tonne 4×2 two axle chassis complete with an Isuzu six speed manual transmission.