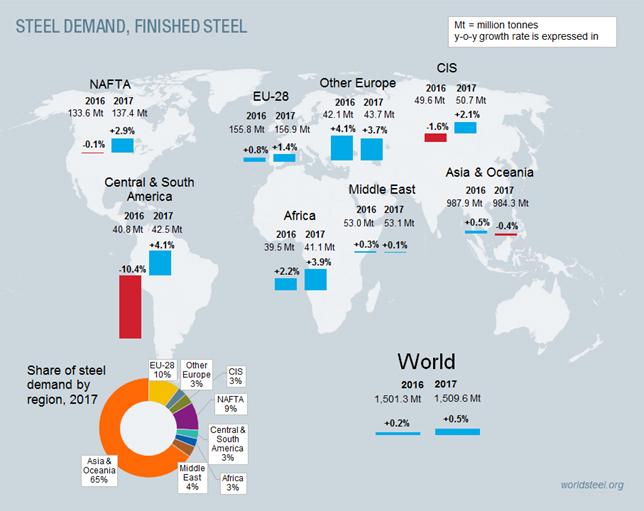 Commenting on the outlook, Mr T.V. Narendran, Chairman of the Worldsteel Economics Committee said, “the steel industry environment remains challenging, with escalated uncertainties driven by geopolitical situations in various parts of the world. Recently the UK referendum outcome has further raised uncertainty on the long-awaited recovery of investment in the EU.
Weakness in investment globally continues to hold back a stronger steel demand recovery. However, a better than expected forecast for China, along with continued growth in emerging economies, will help the global steel industry to move back to a positive growth path for 2016 and onwards. We expect this slight growth momentum to remain weak for the time being due to the continued rebalancing in China and weak recovery in the developed economies.

Downside risks to this outlook come from the high corporate debt and real estate market situation in China, Brexit uncertainties and possible further escalation of instability in some regions. On a positive note, steel demand in the emerging and developing economies excluding China is expected to accelerate to show 4.0% growth in 2017 thanks to the resilient emerging Asian countries and stabilisation of commodity prices.”

Investment is subdued in many regions, not only in China, which is undergoing a rebalancing away from investment driven growth. In the developed world, despite persistently low interest rates, private investment remains weak due to a pessimistic outlook on future demand and other continuing uncertainties. To help confidence, governments have only limited monetary and fiscal policy tools left to boost investment. In many emerging and developing economies, weak commodity prices, geopolitical tensions and highly leveraged corporate sectors all add up to undermine momentum for the needed investments.

Chinese GDP growth in 2016 will be at its lowest level since 1990, but interestingly with a higher contribution from services and consumption. To soften the impact of rebalancing, the government issued a number of mini stimulus measures, boosting infrastructure spending and real esate market and auto sales. As a result, steel demand decline in 2016 will be less severe than the Worldsteel April 2016 forecast. However, the rebound in the real estate market is limited and not sustainable as inventory levels remain very high and apartments are increasingly unaffordable to most residents. The construction sector will therefore continue to drag down steel demand and manufacturing sectors have only limited room for recovery. Steel demand in China is projected to decline by -1.0% in 2016 and by -2.0% in 2017.

In 2016 some low performing emerging economies are showing signs of stabilisation. After two consecutive years of double-digit contraction, steel demand in Brazil will start a moderate recovery in 2017.

The minor rebound in oil prices helped to stabilise the decline in Russia and prevent further deterioration of the Mexican, South American and GCC economies. However, lower and unstable oil prices and geopolitical instability are continuing to undermine the outlook for the MENA region.

Indian steel demand is expected to report solid growth in 2016-2017 backed by consumption-boosting reforms and infrastructure investment, but its sustainability is under question as key levels of investment are being provided by the government while private investment remains weak. In the ASEAN countries, benefiting from stable macroeconomic policies, construction will continue to drive strong steel demand growth.

The EU steel demand recovery stays on track backed by resilient consumption and a mild recovery in construction despite heightened uncertainties following the UK referendum on Brexit. The UK’s steel demand for 2016 and 2017 is expected to reduce due to the referendum result however the longer term impacts of Brexit are difficult to predict at the moment. The refugee crisis also poses challenges to the EU, but the immediate impact on steel demand appears to be minor.

While the US economy continues to show strength, steel demand in the US is struggling to grow due to the strong dollar, which hurts the manufacturing sector, and the collapse in shale related investments. Likewise, Japan’s steel demand growth is subdued due to structural issues and is negatively affected by the appreciation of the yen after the UK referendum.
Steel demand in developed economies is projected to increase by 0.2% in 2016 and by 1.1% in 2017.