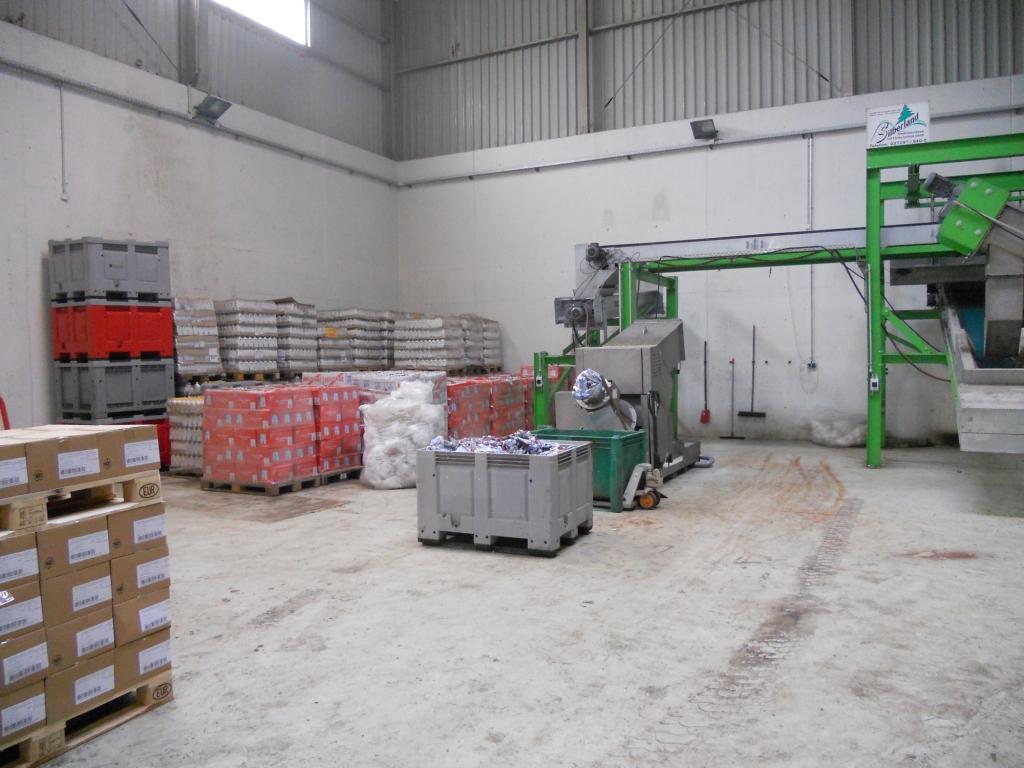 The tipping lorry of the container vehicle moves up. In minutes, its load of food residue is emptied and starts its course to energy recovery. “Energy for tomorrow” is the slogan of the Danpower Group for a reason. Danpower sees the biogas sector as a key growth factor for the future. Twenty five biogas plants are currently in operation, one of which is in Bad Köstritz/Thüringen. Excess, packaged and unpackaged food or food that has reached its expiration date is sensibly converted into energy here. Vehicles with waste bins and containers filled with such food drive in and out daily. Transporters deliver pallets of PET bottles and beverage cartons with juice, milk or similar substances.

Emptying and compacting the packaging a necessary measure for treatment

In the depackaging hall, there is a large system that uses conveyor belts from station to station to break up, sort and clean the food waste. Next to the system in the left wing of the hall is a compact and space-saving machine. It is the FluidEx 600 from HSM. Waiting next to the machine are cleanly lined pallets with full PET bottles and beverage cartons, which are to be thrown into the large hopper of the HSM PET FluidEx 600. 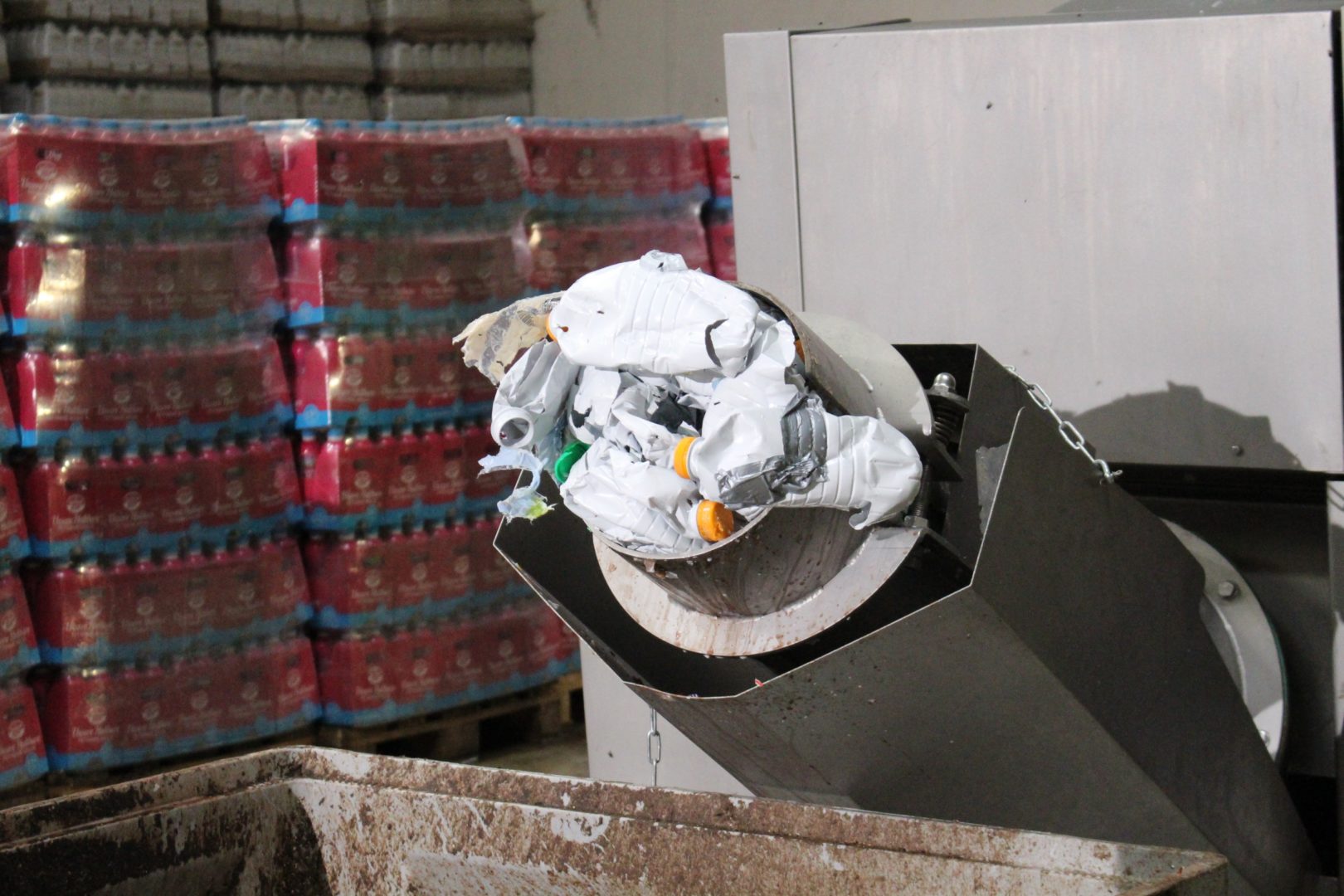 Now the effective emptying and compaction process can begin. The bottles and beverage cartons are pulled in by two shafts. Two other shafts made of special hardened steel perforate the packaging in seconds so that the fluid can escape. The recycling paths then split here: On the one hand, the perforated packaging material is specifically guided through a rotating screw and squeezed further. The containers are emptied up to 98% in this way. The pressed out packaging is fed to the recycling. On the other hand, the food liquid obtained is cleaned of plastic chips and labels by means of an integrated filter system and then flows into a catch basin in the outer area of the machine. The metal basin is divided into two sections so that undesired particles are filtered out and only particle-free liquid makes it to the next station in order to be converted into biogas at a subse-quent stage. The filtered residual material later becomes chemical fertiliser.

The path to biogas

And so begins the extraction process. The food liquid extracted and cleaned in the unpacking hall” now makes its way to the actual biogas production. The separated biomass is heated to 70°C by means of a spiral tube heat exchanger in order to be freed of potential pathogens. Then the organic material must decompose in the main fermenter at a temperature of 42 °C. As a consequence, the produced biogas goes into secondary fermentation in the gas tank. Another important step is now the desulphurization and de-humidification. The biogas then finally runs through the activated charcoal filter for one last purification process. The generated energy and heat can now be used. The electric energy acquired is used entirely for the good of the public power network while the thermal energy is given to the chemical plant in Bad Köstritz. The liquid and solid ferments can be used as fertilisers in agriculture.

The recycling of raw material

Up to 30,000 tonnes of packaged and unpackaged food waste is processed in this way in the biogas plant in Bad Köstritz annually, 5,000 tonnes of which alone are emptied by the Fluid Ex 600 from HSM. The machine is in use eight hours a day, five days a week. The HSM FluidEx 600 has also been specifically customised for the customer. Technical refinements were developed in the course of the application to the smallest detail and give the powerful and space-saving machine an indispensable place. Jürgen Schleinitz, head of the biogas plant: “Over the course of its application and our experience, the HSM FluidEx 600 has been developed exactly according to our needs. It therefore performs an important function in the production process of the biomass, which is converted into energy in our plant”. 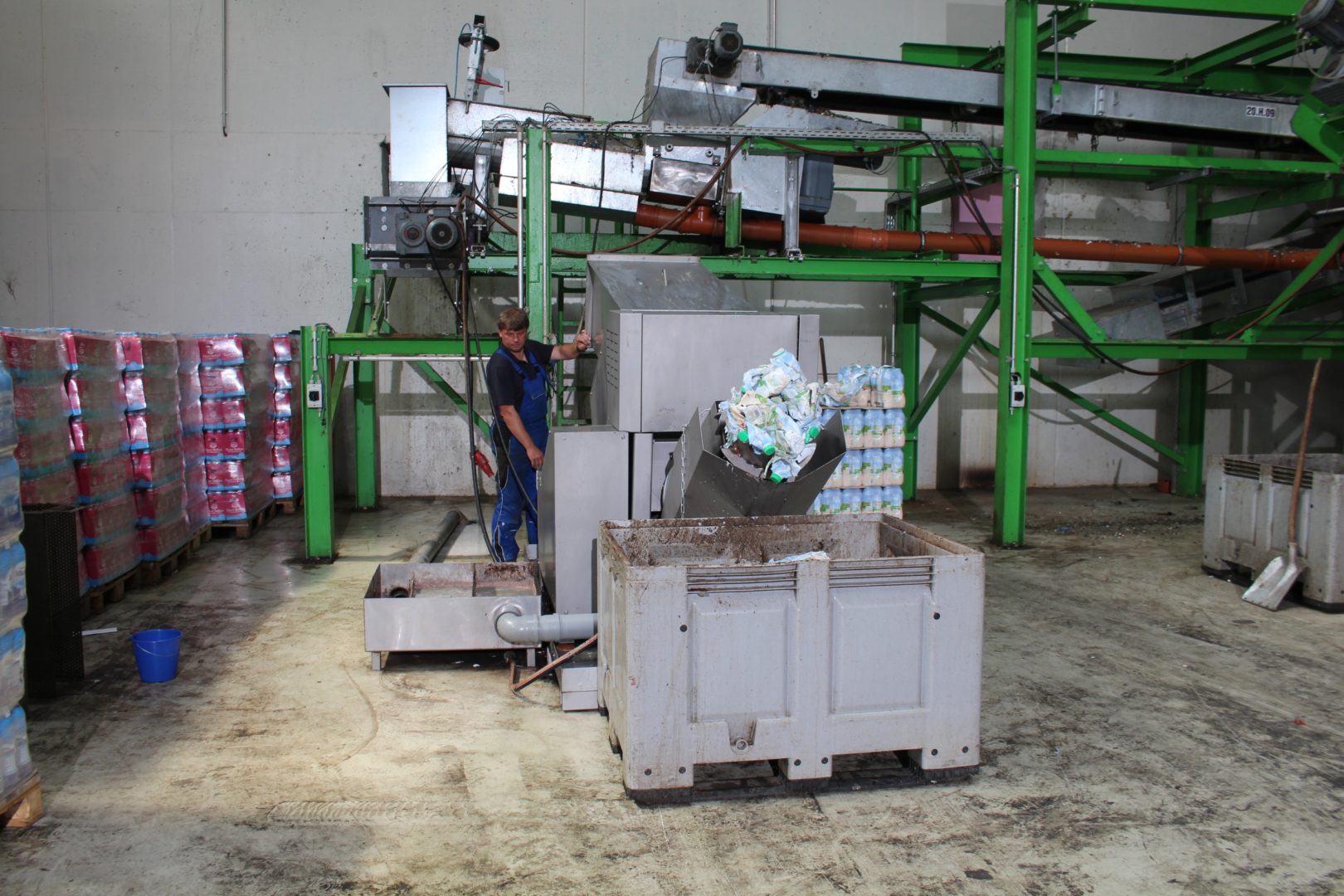 Jürgen Schleinitz, who looks back on 20 years of experience in the waste industry, had already had very positive experiences with HSM machines before his time at BGA Biogas 2 GmbH. “I already knew the products of HSM and was convinced of the quality and service. Following the acquisition, we further developed the FluidEx 600 for our special needs. HSM was able to help considerably with the additional machine development, which was specifically tailored to the BGA biogas requirements. For new challenges arise in daily use. We were able to specifically co-ordinate our experiences and requirements here with the technical department of HSM”, says Jürgen Schleinitz. The short lines of communication and the high quality of service are additional reasons why BGA Biogas2 GmbH chose HSM and the FluidEx 600. “We are completely satisfied with HSM. From the project planning, to the care, sales and installation of the system to their service. It is a mature relationship that is very valuable to us”. So it is no wonder that BGA Biogas 2 GmbH gladly recommends HSM.

Company
Danpower stands for economical and environmentally friendly energy and heating supply. The companies of the Danpower Group particularly rely on efficient energy production by means of cogeneration and the use of biomass. One of the 25 biogas plants is located in Bad Köstritz / Thüringen in the industrial area of Heinrichshall. In 2010, Danpower GmbH purchased the system in Bad Köstritz. Within the last two years, Danpower has invested 6.5 million euros in this biogas plant, which trades under BGA Biogas 2 GmbH.

Solution
Due to the acquisition of the HSM FluidEx 600, BGA Biogas 2 GmbH has the ability to recycle filled PET bottles and beverage cartons. Up to 30,000 tonnes of food waste is processed in Bad Köstritz annually, of which 5,000 tonnes are emptied by the HSM FluidEx.