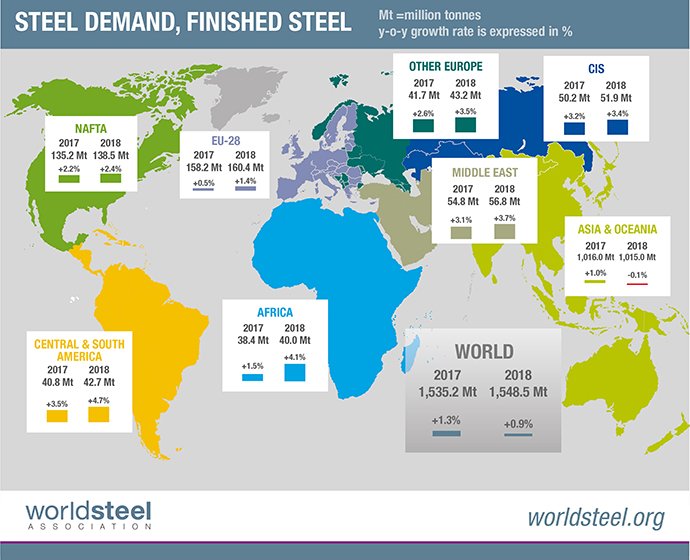 Commenting on the outlook, T.V. Narendran, Chairman of the worldsteel Economics Committee said, “In 2016, steel demand recovery was stronger than expected with the upside mostly coming from China. We believe in 2017 and 2018 we will see a cyclical upturn in steel demand with a continuing recovery in the developed economies and an accelerating growth momentum in the emerging and developing economies. We expect that Russia and Brazil will finally move out of their recessions. However, China, which accounts for 45% of global steel demand, is expected to return to a more subdued growth rate after its recent short uplift. For this reason, overall growth momentum will remain modest.

With the risk of global recession receding and economic performance improving across most regions, a number of geopolitical changes still create some concern. US policy uncertainties, Brexit, the rising populist wave in current European elections and the potential retreat from globalisation and free trade under the pressure of rising nationalism adds a new dimension of uncertainty in investment environments. To balance this, risks from ongoing conflicts in the Middle East and in Eastern Ukraine appear to be reducing.

In the capital markets, the probable US FED interest rate increase and any appreciation of the US dollar is likely to have global impact. In particular, it may provoke capital outflows from the emerging economies and place a risk on corporate debt in the developing countries, which has climbed significantly over the last few years.

The pickup in oil prices in 2016 helped the fiscal position of oil producing countries. In 2017-18 oil prices are expected to show a moderate gain but any spike in oil prices to the levels seen in 2010-12 seems unlikely despite the recent OPEC agreement on oil production cuts. Other commodity prices also rebounded due to stronger activities in China, but no further hikes are envisaged. The mildly rising oil prices may stimulate investment in economies worldwide.

The automotive sector has been the top performer among key steel using sectors thanks to the consumption driven recovery in the developed economies, low oil prices and the government stimuli programmes supporting automobile purchases in several countries. However, this may now be approaching a peak.

The construction, building and infrastructure sector, which accounts for 50% of global steel use, has been showing a divided picture between the developing and developed economies. This sector has been a major driver for steel demand in the developing countries driven by urbanisation, but activity in the developed economies since the 2008 financial crisis has been more subdued. This appears to be about to change with a recovery in construction activities apparent in the EU through the improving economic conditions and the potential renewal initiatives for infrastructure in the US.

The machinery sector could also benefit from rising investment activities if the uncertainties surrounding the global economy can be contained. On the other hand, depression in shipbuilding activities is expected to continue for some time given the global glut in shipping capacity.

The economic rebalancing and reform agenda of the Chinese economy continued for the first half of 2016, only to be interrupted by the government’s mini stimulus measures designed to reduce the speed of the decline. This produced a short term boom in infrastructure investment and the housing market, which stimulated demand for steel and other commodities. As a result, China’s steel demand showed growth of 1.3% in 2016. While the Chinese economic outlook appears stable and steel demand continues to remain strong in the early part of 2017, this is expected to gradually decelerate as the government tries to retighten its real estate policies.

Benefiting from strong fundamentals, newly announced measures related to fiscal stimuli and rising infrastructure spending, the United States is expected to continue to lead growth in the developed world in 2017-18. However, despite a recovery in oil prices, a rebound of investments in the oil and gas sector may be limited given the increased efficiency of shale producers.

The EU recovery is solidifying with many positive developments. Eurozone monetary policy is expected to remain on its current path, at least in 2017, while fiscal tightening is not expected to strengthen further and risk of disinflation has significantly receded. If political stability can be maintained, investment is expected to pick up to provide a further boost to the recovery. Benefiting from the improving global economy and weak yen, Japan’s steel demand is expected to show a stable recovery.

Having dealt with the structural problems and fall in commodity prices, the Russian and Brazilian economies are stabilising and expected to show modest growth in 2017. Russian growth will continue to pick up in 2018 as structural reforms take more effect. After the demonetisation shock, the Indian economy is expected to resume growth, although on a slightly weakened basis. The ASEAN countries are expected to demonstrate solid growth in 2017-18. However, the region remains vulnerable to currency volatilities associated with US interest rate hikes and dollar appreciation.