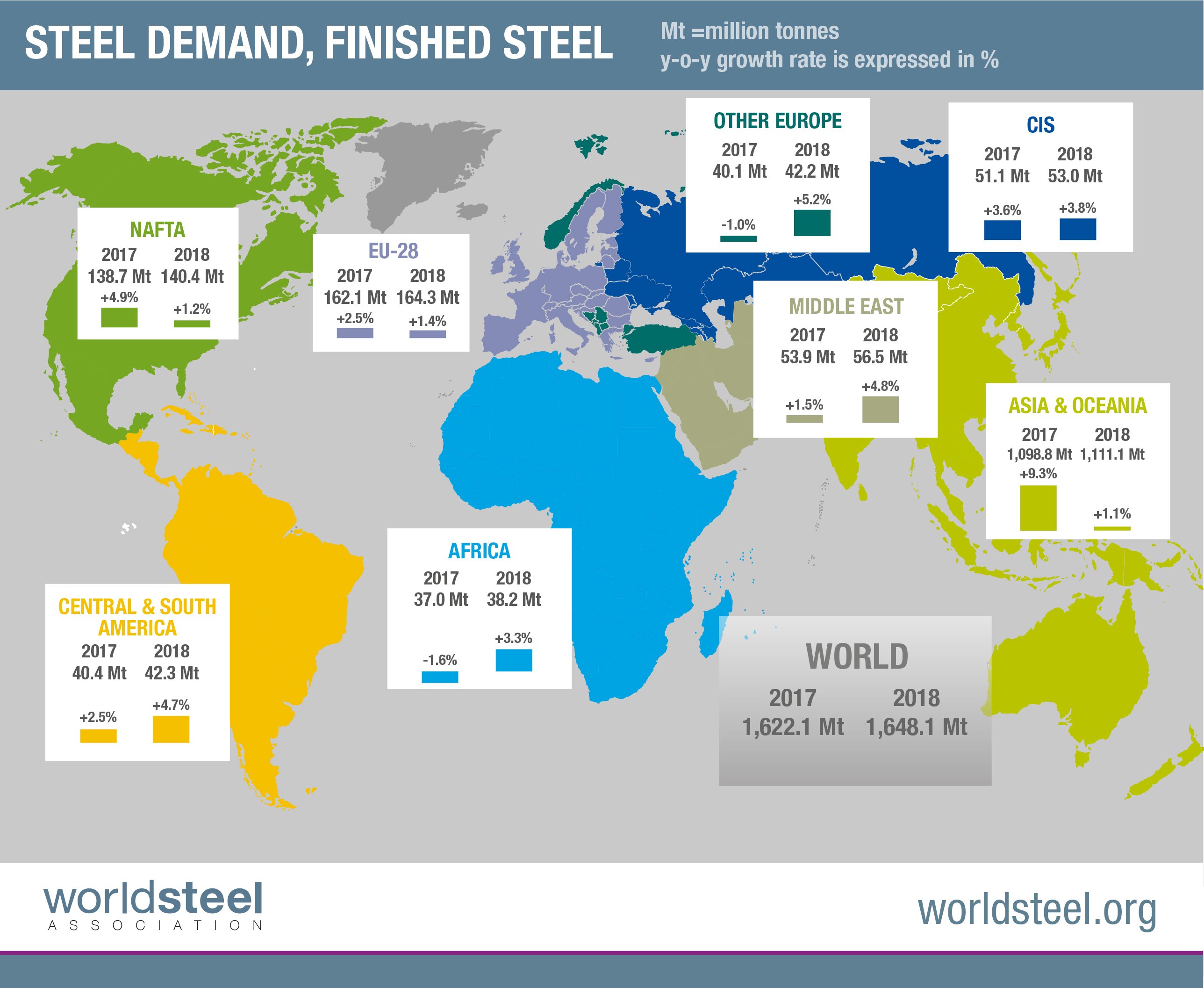 Commenting on the outlook, Mr T.V. Narendran, Chairman of the worldsteel Economics Committee said, “progress in the global steel market this year to date has been encouraging. We have seen the cyclical upturn broadening and firming throughout the year, leading to better than expected performances for both developed and developing economies, although the MENA region and Turkey have been an exception.

The risks to the global economy that we referred to in our April 2017 outlook, such as rising populism/protectionism, US policy shifts, EU election uncertainties and China deceleration, although remaining, have to some extent abated. This leads us to conclude that we now see the best balance of risks since the 2008 economic crisis. However, escalating geopolitical tension in the Korean peninsula, China’s debt problem and rising protectionism in many locations continue to remain risk factors.

In 2018, we expect global growth to moderate, mainly due to slower growth in China, while in the rest of the world, steel demand will continue to maintain its current momentum.

So, world steel demand is recovering well, driven largely by cyclical factors rather than structural. The lack of a strong growth engine to replace China and a long term decline in steel intensity due to technological and environmental factors will continue to weigh on steel demand in the future.”

Both advanced and developing economies are exhibiting stronger economic momentum this year. Confidence and investment sentiments are improving in a large part of the world despite some financial market volatility and growing concern of stock market overvaluation.

Also on a positive note, global trade is gaining momentum despite worries about rising protectionism and talks of rearranging existing free trade agreements.

The US economy continues to exhibit robust fundamentals supported by strong consumer spending and rising business confidence. Concern about tensions within the EU particularly over migration policies is receding and the EU economic recovery is broadening. Japanese steel demand is showing better than expected performance benefitting from the government stimulus package, improving exports and preparations for the 2020 Olympic games. South Korea’s steel demand is suffering from high consumer debts, weakening construction and a depressed shipbuilding sector, while escalated tension around the North Korean nuclear weapons threat poses a serious and highly unpredictable risk.

With these generally favourable developments steel demand in the developed economies is expected to increase by 2.3% in 2017 and 0.9% in 2018.

The Chinese economy, which has been gradually decelerating, is increasingly supported by consumption while investment continues to decelerate. However, government stimuli, particularly a moderate boost to the construction programme, contributed to increased GDP growth in 2017.

China’s steel demand is expected to increase by 3.0% in 2017, an upward revision over the previous forecast. The recent closure of induction furnaces will lead to a one-off jump in measured steel use in 2017 to 12.4% (please see A special note on China above).

The outlook for China’s steel demand in 2018 remains subdued, showing no growth over 2017 as the government resumes and strengthens its efforts on economic rebalancing and environmental protection.

Developing countries are benefitting from the global recovery and economic reforms, but to varying degrees

India had a slowdown in economic activity in 2017, but accelerating government reforms are expected to bring about a better investment environment leading to growth in the coming years. Investment activities are still driven by government initiatives and private sector investment is still restrained due to leveraged corporate balance sheets.

ASEAN remains a high growth region, especially Vietnam and the Philippines, while more mature economies such as Thailand and Malaysia are showing slower growth.

In the CIS steel demand is expected to strengthen in 2017-2018 and specifically Russia is likely to maintain its slow recovery.

Turkish steel demand is expected to resume growth momentum in 2018.

The MENA region’s outlook has suffered from low oil prices, geopolitical strife and high inflation. The region would benefit from reconstruction efforts once the major conflicts are ended. GCC countries continue to struggle with the low oil price environment.

Countries in South America have been slow so far to benefit from the recovery in the global economy. In Brazil continuing depressed construction activity has held demand recovery back in 2017 but a stronger recovery is expected in 2018.

The construction sector in the developed economies, which had been slow to recover from its collapse after the 2008 economic crisis, is now showing more positive signs both in the residential and commercial sectors due to rising incomes and improving investment sentiments. Infrastructure investment, which has been driving steel demand in developing countries, is likely to get some additional support from the developed world’s infrastructure renewal initiatives.