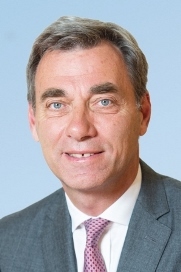 Typically, these kinds of batteries reach the second-life stage after approximately 7–12 years of use. At that point in their life cycle and depending on the conditions of the first application, the ability of 10-year-old batteries partially depleted of their original capacity to consistently deliver high-quality service has to be proven. In addition, they will face competition from new batteries of a more advanced design – at least two generations ahead. The priceperformance evolution over time needs to be taken into consideration.

To summarise, there are potentially a number of applications for second-life batteries, but the business model first needs to be tested and validated.

So are battery manufacturers becoming electricity suppliers?
They might be, but in a different way. For instance, think of batteries as smart energy reservoirs that provide services. However, they do not fulfil the role of a traditional electricity supplier.

As with any equipment, batteries age over time. And ageing means a reduction of their capacity. It’s generally considered that a battery that has aged to the extent that its capacity is 70% less than its initial capacity is no longer fit for EV, and that is when it may have potential for other applications where such a reduction in capacity is not so critical (e.g. ESS could be one such application).

Are second-life applications only possible for lithium-ion batteries from electric cars or also those from other applications?
Batteries are designed for a specific set of operational parameters for which they excel. Any repurposing of a battery for a different application by nature means a less good fit. We do not expect that second-life will grow beyond limited niche markets.

To what extent can battery recyclers participate in this business model?
Firstly, respect for the environment is a priority at Saft. As the world population grows, the demand for primary materials will become increasingly unsustainable. For that reason, it’s essential to return materials back to the economy at the end of their life cycle.

We recognise the value of recycling which allows for the reuse of valuable and scarce materials in industry, with a much reduced environmental footprint of secondary raw materials compared to primary ones. This is why we have a bring-back scheme for our nickelbased batteries.

In addition, recent research by Umicore and Audi found that 95% of the valuable minerals – cobalt, nickel and copper – inside a lithium-ion battery can theoretically be recycled. I’m sure the battery recyclers are ready and willing to do so. Moreover, some recyclers are now implementing the recycling of lithium. But the question remains as to whether it can be done at scale.

“The solution is the introduction of a simplified EPR program.”