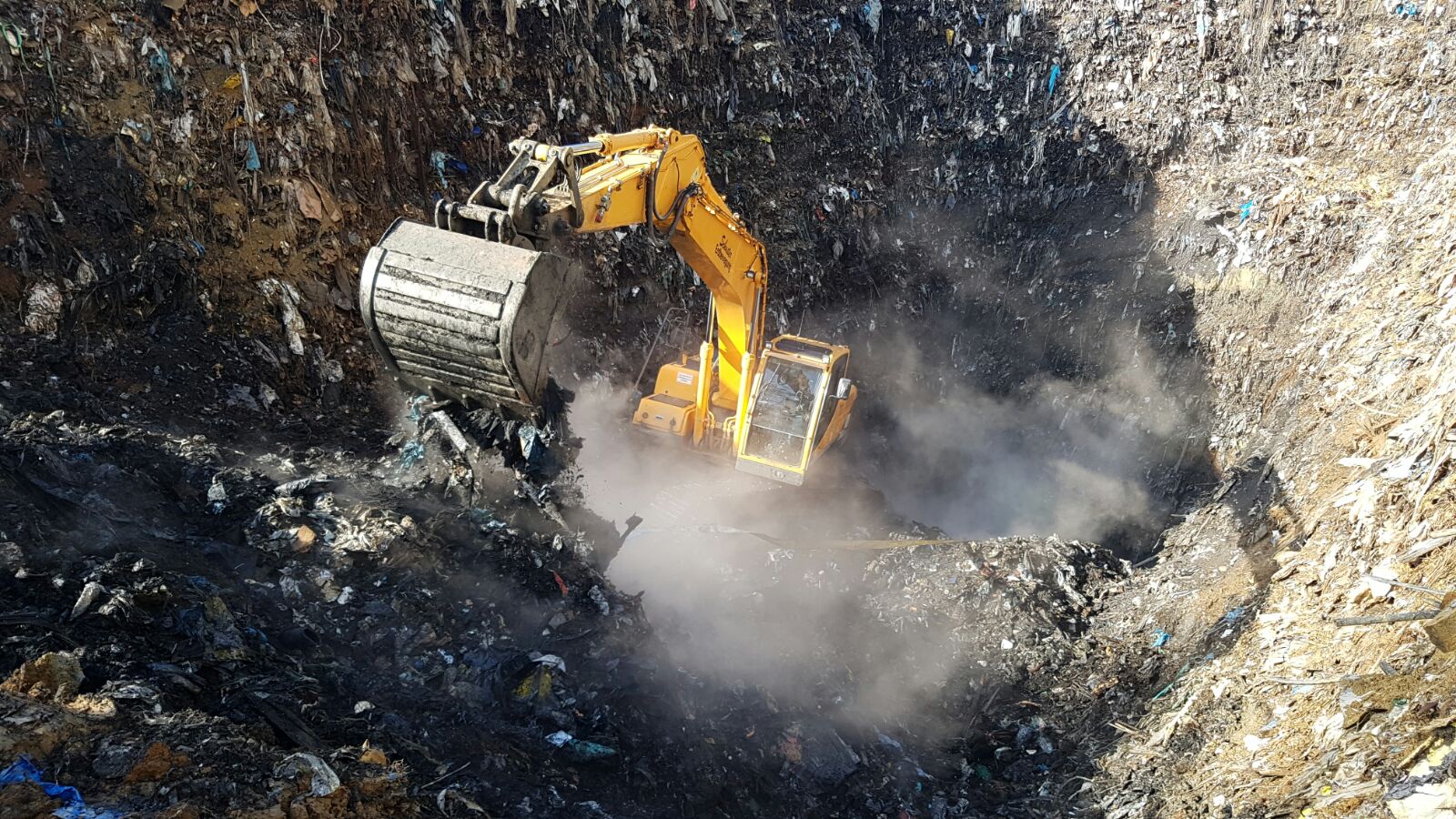 In particular, older sites predating the introduction of government regulations, which tend to be filled with municipal solid waste and lack modern landfill technology, will soon require costly remediation measures to avoid future environmental and health problems. In Europe, there are between 150,000 and 500,000 landfill sites, of which an estimated 90% are “non sanitary” landfills predating the EU Landfill Directive of 1999. Enhanced Landfill Mining (ELFM) has the potential of providing a solution that could dramatically reduce future remediation costs and reclaim valuable land while unlocking precious resources.

The four-year NEW-MINE research project, led by KU Leuven Institute for Sustainable Metals and Minerals SIM2, was launched in 2016 to look into different aspects of Enhanced Landfill Mining. Its aim is to develop and integrate cutting-edge, eco-friendly ELFM technologies to valorize Europe’s landfills, recovering resources such as materials, energy and land, while mitigating future environmental and health risks and avoiding significant remediation costs.

Dr. Lieven Machiels, Science & Technology Coordinator of the project at the KU Leuven Institute for Sustainable Metals and Minerals, explains: “We consider Enhanced Landfill Mining the missing link to a Circular Economy. The Circular Economy Action Plan of the European Green deal focuses on a “sustainable products” policy that prioritizes reducing and reusing materials before actually recycling them, moving up the Waste Hierarchy. Nevertheless, what is not yet addressed is the question of what Europe and other countries in the world will do with the vast amounts of industrial and consumer waste that have been disposed of in waste dumps and landfills over the past 100 years. In this context, ELFM has been proposed as an out-of-the-box approach to address how we can deal with the waste of the past, irrespective of the urgent need to avoid new waste creation and disposal in the future.”

The project has received funding from the European Union’s EU Framework Programme for Research and Innovation Horizon 2020 and involves eight European universities as well as Stadler and other companies from the private sector. Fifteen PhD students have been tasked with researching new technologies and testing them in four technical work packages that follow a value chain approach. From “Innovative landfill exploration and mechanical processing”, to “Solar/Plasma/Hybrid thermochemical conversion” and “Advanced upcycling”. The fourth work package applies multi-criteria assessment methods to compare combined resource-recovery/remediation, that is ELFM, with the “Do-nothing’, “Classic remediation”, and “Classic landfill mining with (co-incineration)” approaches.

Dr. Lieven Machiels explains: “In classic Landfill Mining, the focus is on reducing the volume of waste, for example through incineration and the recovery of land, while the production of recyclates is in general limited. In the NEW-MINE project, we followed an ELFM approach aiming at a maximal recovery of resources. Instead of burning the light fraction, we produce a Refuse Derived Fuel (RDF), which is thermally converted to produce a synthetic gas and a vitrified residue. The syngas can be further upcycled to produce methane or hydrogen, while the vitrified residue can be used for producing cement and construction materials.”

RWTH Aachen University, one of the project’s partners, invited Stadler to participate, contributing its expertise and equipment. The company played an important role in the first work package, dedicated to mechanical processing. The main goal was to identify ways of improving the quality of the fractions in order to produce RDF, which has a variety of applications. Another important goal was to research uses for fine fraction, which accounts for more than 50% of the waste in landfill mining, and currently has no utilization. The project showed that further mechanical separation of fine fraction can produce sand for use as an aggregate in the construction sector. The light fraction can also be used in a thermo-valorization process.

Stadler also contributed to the Training Programme associated to the project with a course on “Automated sorting technology for complex waste”, which was held during the second NEW-MINE Network Event for the fifteen participating PhD researchers.

The theoretical research on mechanical processing was tested in real conditions in the Mont-Saint-Guibert landfill in Belgium. The landfill waste was excavated and processed.

Ulrich Sigmund, Head of Research and Development at Stadler, describes the process: “An STT6000 Ballistic Separator was used in the first step of the mechanical treatment for the recovery of RDF and other recoverables, such as metals and inert materials. The machine separated the output in three fractions – fines, rolling fraction and flat fraction – which were then treated separately in order to investigate further recycling possibilities.”

Dr. Cristina Garcia Lopez, one of the NEW-MINE project´s researchers, adds: “Since the landfill waste is a very complex and heterogeneous material due to the amount of impurities, the ballistic separator provided us the opportunity of dosing the unsorted and unshredded excavated waste into three different material flows: potential RDF, 3D fraction and fines. It also allowed us to sort the landfill waste in its original size without shredding, avoiding the loss of small particles in the fine fraction – which required fewer steps. Besides, the great infeed of the ballistic STT 6000 (150t/h, depending on the density of the material), made it quite interesting since the amount of waste buried in landfills is considerably high while the general mechanical processing capacity is really low compared to the excavation capacity.”

Landfills present a particular challenge, as Dr. Lieven Machiels explains: “The level of moisture of landfilled waste is much higher than in fresh waste, and the waste is strongly degraded. Work package 1 analyzed how this material behaves in all steps of the mechanical separation process and what the properties are of the different output fractions. This research was new, and therefore its results are important for the future of landfill mining.”

Dr. mont. Bastian Küppers, also a researcher in the NEW-MINE project, adds: “The continuous mechanical treatment of the landfill is extremely challenging, as the high water content leads to blockages in the process chain and reduces the performance of plant and machinery. This is especially true for fine fractions.”

Another significant challenge in the project was the fact that the excavated waste had to be processed on site, so the Ballistic Separator had to be installed on a temporary concrete foundation in the landfill.

The Stadler Ballistic Separator has overcome all the challenges, showing that it can perform in these difficult conditions and confirming the feasibility of the project: “The high moisture value of the material was very challenging because the input was composed of pieces of rock and lumps of earth of up to 100 kg,” says Ulrich Sigmund.

Mr. Christian Nordmann, Deputy Head of Research and Development at Stadler, who worked actively on the tests in Belgium, explains: “The machine is very robust due to the two drives and central lubrication during operation. Also, the bearings are very well sealed, so the machine can operate outdoors. This enables the STT6000 to deal with the challenges found in the excavated landfill material, such as high moisture, dust and impact. In the tests we were able to model the material separation, including mass distributions and material parameters of the derived fractions.”

Dr. mont. Bastian Küppers adds: “Stadler Ballistic Separator has proven to be very robust and useful for loosening up, separating and thus preconditioning the material for treatment.”

“The tests showed that a new approach of starting a recycling process with a separation in three fractions is possible. This saves wear and energy compared to standard processes with a shredder/screen combination,” concludes Ulrich Sigmund.