Metals such as neodymium and dysprosium have a substantial supply risk, high commercial value, and demand for neodymium and dysprosium is expected to rise by 700% and 2600% respectively over the next 25 years, due especially to the increasingly widespread use of all-electric and hybrid electric vehicles (HEVs) as well as wind turbines. Recycling end-of-life products such as NdFeB magnets constitutes a promising strategy to mitigate the supply risk. The potential return flows are expected to quadruple by 2040. Moreover, life cycle assessment (LCA) studies have already been conducted for NdFeB magnets produced from virgin raw materials and magnets produced using a magnet-to-magnet recycling process. The results show that the recycling process has, even in the worst case, less than half of the environmental impact compared with production using primary raw materials, and in some comparisons less than one tenth. The environmental impacts measured vary greatly, depending on the raw materials, the processing routes, and the LCA methodology used. To date, less than 1% of REEs are being recycled, partially due to a lack of efficient recycling technologies. The creation of a rare-earth recycling industry in Europe is urgently required, especially as Europe is the biggest consumer of magnets and, more generally, of systems containing magnets. Moreover, the potential feedstock of secondary sources of magnets is expected to increase in the coming decades, as described by Reimer et al. (2018) and shown in the figure below. 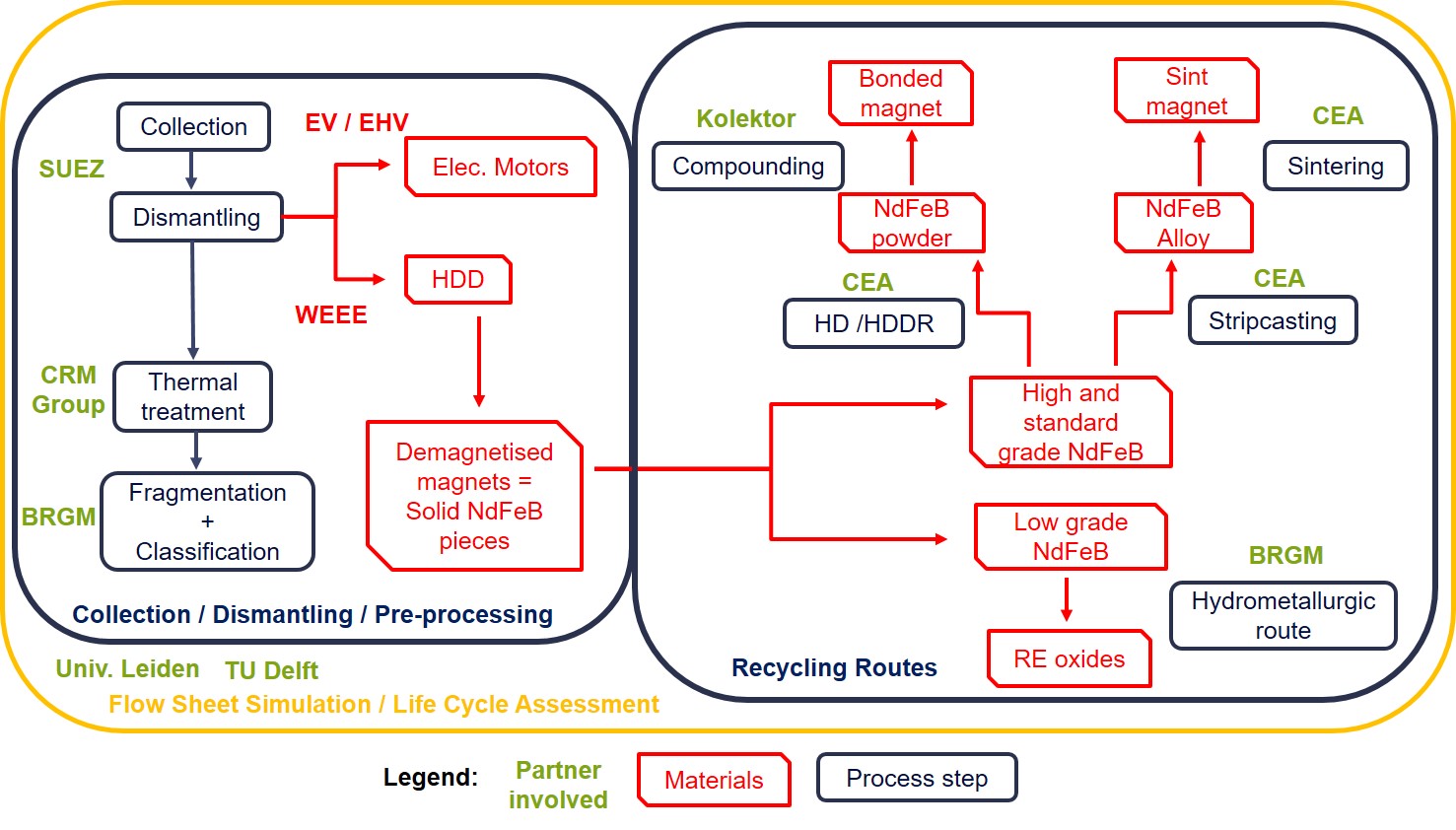 The VALOMAG collaborative project was set up to make the recycling of permanent magnets feasible. VALOMAG aims at scaling up a technical solution for disassembling permanent magnets in order to develop more efficient routes for recycling and recovering magnets by means of several different recycling methods deploying hydrometallurgical processes to extract these metals. The VALOMAG project was made possible by EIT RawMaterials GmbH, a consortium co-funded by the European Union to make the European minerals, metals, and materials sectors sustainably competitive along the entire value chain by driving innovation, education, and entrepreneurship. The VALOMAG project is being driven by a number of key partners, who have combined their expertise to develop a new value proposal that meets the needs of the permanent magnets market. SUEZ (environmental services in the waste management and water sectors), BRGM (the French geological survey), CEA (French Alternative Energies and Atomic Energy Commission), and the Centre de Recherches Métallurgiques asbl CRM Group France are working on sourcing and characterising feedstock for end-of-life (EoL) products. CRM and BRGM are also working on the thermal treatment, fragmentation, and classification. BRGM and CEA are collaborating with Kolektor Magnet Technology GmbH (Germany) and Delft University of Technology (TU Delft, The Netherlands) on short-loop recycling processes and a hydrometallurgical route. TU Delft is working together with Leiden University (The Netherlands) on the technical, economic and environmental assessments with a life cycle analysis and a mass flow analysis of the various recycling routes. 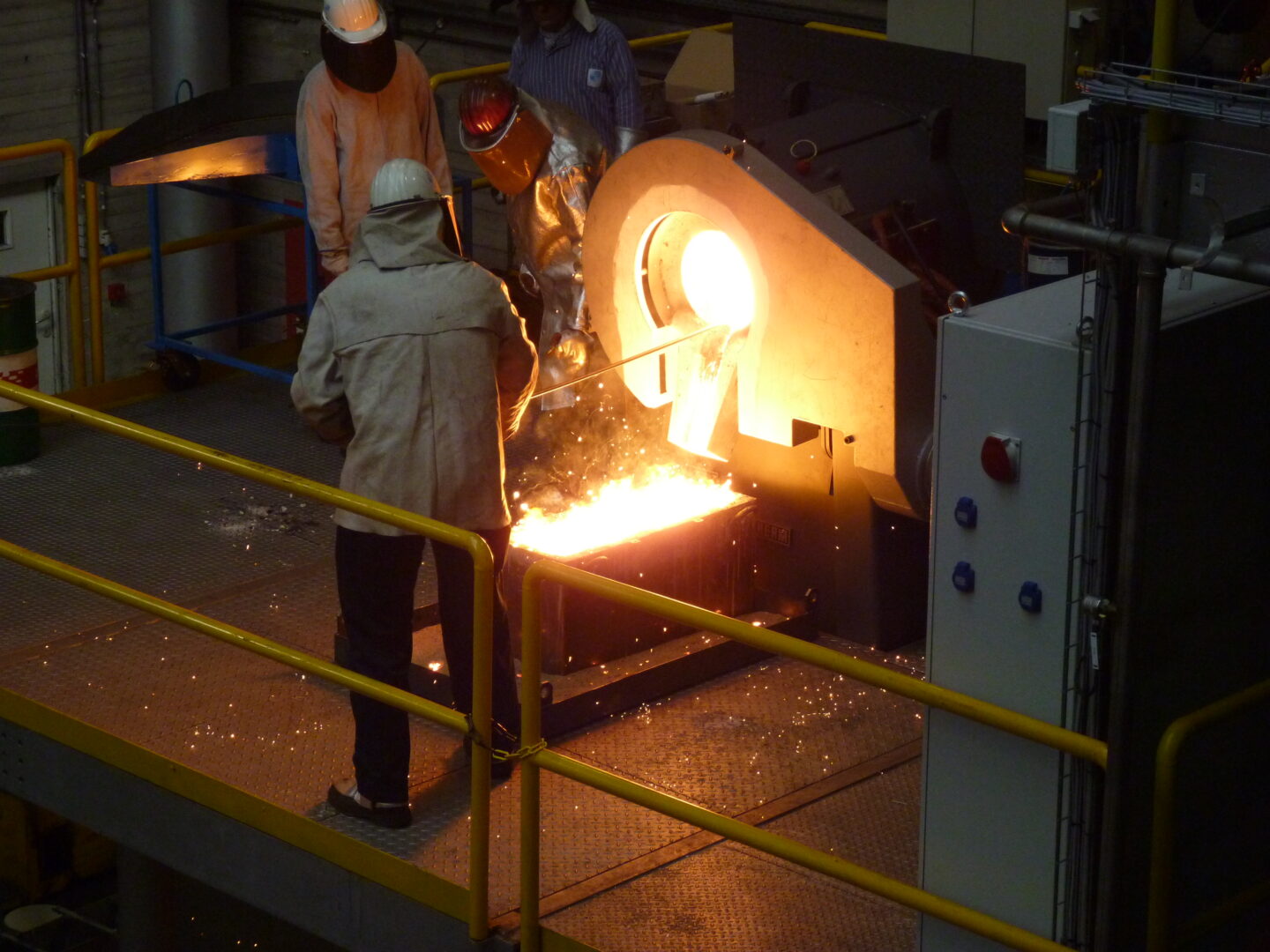 The technical solution developed by the VALOMAG project consists of two short-loop recycling routes for high- and medium-grade magnet waste and a hydrometallurgical route for low-grade magnet waste. The first step is to dismantle the EoL products containing permanent magnets, such as computer hard disk drives (HDDs) and the electric motors of electric (and hybrid) vehicles and demagnetise the magnets using a specific thermal treatment, followed by the fragmentation of EoL products to extract and sort the magnets and other materials (mainly nonferrous metals). The permanent magnets fraction is then crushed down to 1-mm particles in order to optimize its reactivity with regard to the subsequent chemical processing. The sieving and crushing process provides two fractions: high- and standard-grade NdFeB material and low-grade NdFeB material. The high- and standard-grade material can be processed using either an HD/HDDR process or a sintering process, both of which are being tested in the course of this project. HD/HDDR stands for hydrogen decrepitation (HD) and hydrogen-disproportionation decomposition-recombination (HDDR). The HD/HDDR pulverised material is to be compounded. The outer route to the HD/HDDR is the sintering route, which consists of melting the magnets and using the alloys thus obtained to manufacture powders and new sintered magnets via the conventional powder metallurgy route. The low-grade NdFeB is treated via a hydrometallurgical route, which makes it possible to separate and recover the REEs as REE oxides using a chemical treatment. The hydrometallurgical route is considered as an alternative to the first two short-loop recycling methods and makes it possible to treat fine particles of RE materials and RE oxides, depending on the quality of the magnets extracted from EoL products.

The VALOMAG project will lead to an efficient technology to separate PMs from various waste sources and a new dismantling process line for HR/HDDR recycling. The new magnets (sintered and bonded) will be manufactured on an industrial scale and the REE oxides produced can be subsequently used in different components or be subjected to a chemical process to extract the REEs from their oxides as metals. These innovative technologies for recycling magnets will be assessed with an LCA and compared with the existing virgin magnet production system based on recent literature.

As NdFeB magnets are used in a wide range of applications and markets, the EoL products, which can be considered as sources of secondary raw materials for new magnets, also originate from diffuse and diversified sources, leading to certain challenges in terms of collection and sourcing. Consequently, the collection strategy needs to be adapted to suit the various types of waste feedstocks.

Some collection schemes already exist for EoL IT equipment, such as computers containing HDDs, and also for waste electrical and electronic equipment (WEEE) such as air conditioners, e-scooters and large appliances containing motors with magnets as well as for EoL vehicles. However, the accessibility of some e-parts containing magnets needs to be assessed and developed, especially in EoL vehicles and e-vehicles, as only batteries and some motors are currently separated and treated.

New collection schemes need to be put in place for motors and magnets and supported by a specific regulation, such as the 2006/66/EC Directive on batteries and accumulators, and waste batteries and accumulators. This is one of the recommendations of the European Call for Action on Rare Earth Magnets and Motors, which is the result of a stakeholder consultation process conducted under the auspices of the European Raw Materials Alliance (ERMA) and was launched by the European Commission under the leadership of Commissioner Thierry Breton and Vice President Maroš Šefčovič in 2020.

IERC 2023 in Salzburg next week