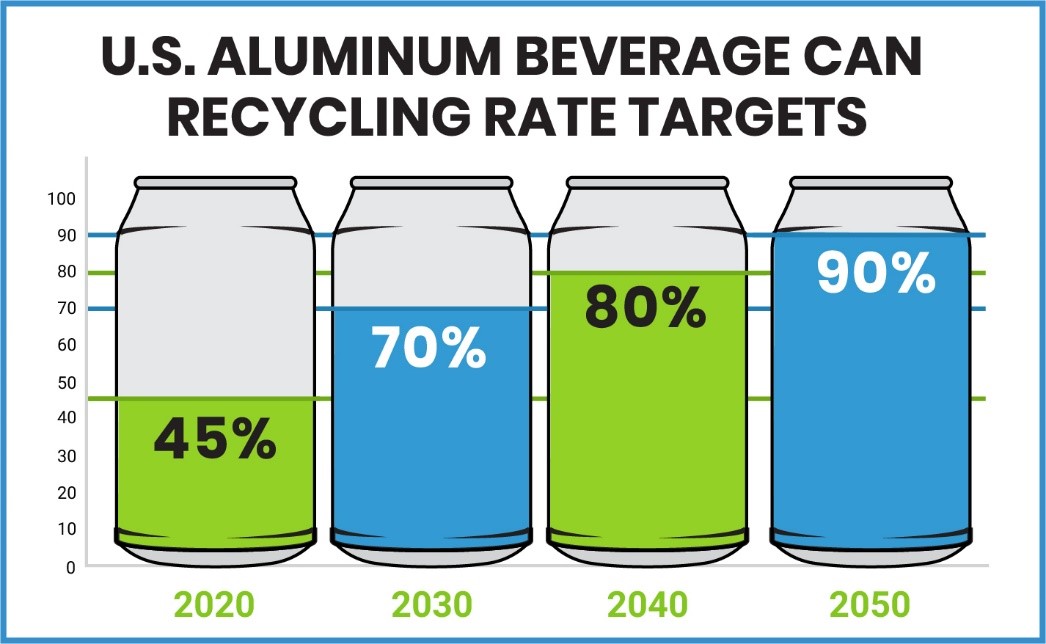 Those targets are reaching a 70 percent recycling rate by 2030, 80 percent by 2040 and 90 percent by 2050. This new report provides more details on what the can industry is doing in the near-term within its four pillars of action to make progress toward the targets and the potential total used beverage cans (UBC) that could be recycled through certain pillars.

The report explains in detail how CMI will achieve its targets via four pillars of action, which are:

This report provides new data on the potential impact of certain pillars. For example, if there was a national deposit system that had recycling rates similar to a state such as Michigan where there is a 10-cent deposit, an additional 50 billion aluminum beverage cans would be redeemed through the deposit system and ultimately recycled. This pillar has the greatest potential impact and would allow the industry to quickly reach its goals. This is part of why CMI is aggressively pushing for new, well-designed deposit systems.

CMI modeling also finds that 23 billion additional aluminum beverage cans could be captured from U.S. households if they all went from their current level of recycling access to having automatic, cart-based curbside recycling service with robust education. This number was calculated based on data from The Recycling Partnership (The Partnership). CMI was a founding member of what ultimately became The Partnership and is continuing its general support of the organization so it can continue its work to increase and improve household recycling.

If there was perfect sortation at recycling centers, an estimated 3.5 billion additional aluminum beverage cans could be collected for recycling. CMI issued a report in 2020 finding that up to one in four UBCs are missorted at material recovery facilities (MRF), which is where single stream recyclables are sorted. Last year, with the financial support of Ardagh Metal Packaging and Crown Holdings and in conjunction with The Partnership, grants were awarded to five MRFs for can capture equipment that when installed will capture 71 million aluminum beverage cans per year. Ardagh and Crown are continuing to fund activities through CMI to catalyze additional can capture equipment in MRFs including testing at MRFs of exactly how many cans are being missorted and developing a return on investment (ROI) calculator that was published online for any MRF to use at no cost to determine the ROI of investing in can capture equipment in its facility.