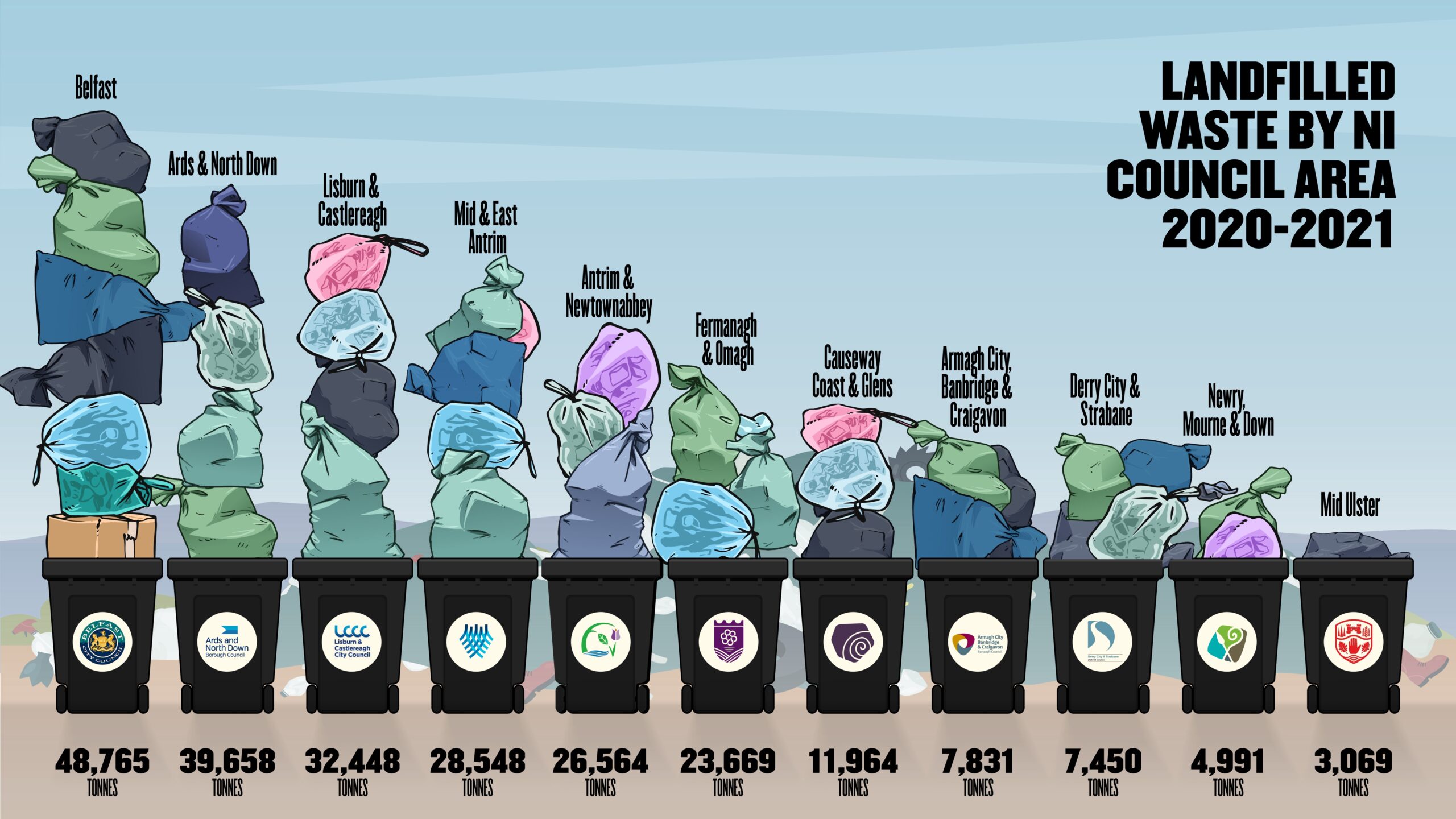 He says: “It is difficult to believe that 234,000 tonnes of non-recyclable household waste were landfilled in Northern Ireland in 2021. We need to talk about the elephant in the room: the high landfill rates are down to those Councils not sending their black bin waste to companies in Northern Ireland that can extract the recyclable materials from the waste and then produce fuel from the remainder.”

“The production of fuel from unrecyclable black bin waste prevents it from going to landfill sites where it will decompose and produce methane, one of the biggest contributors to global warming. Methane has an effect 21 times greater than carbon dioxide as a greenhouse gas. Therefore, Councils sending waste to landfill is having a greater impact locally by the generation of methane as a by-product than the carbon derived by sending the waste to fuel markets where it is used to generate heat and power as a coal replacement, in the case of solid recovered fuel.”

“Our unrecyclable waste is divided into three categories: high-value material that is prepared for recycling waste fuel and manufactured for use in highly efficient heat and power plants, cement kilns, and landfill. Material in every wheelie bin should be considered a valuable resource,” adds Mr Doherty.

The Northern Ireland Environment Agency monitors all waste and its quarterly statistics are always eagerly awaited. However, Mr Doherty says that: “We need to assess statistics fairly: materials prepared for recycling, such as aluminium, steel, paper, cardboard, glass and plastic, that have been reported in the media recently, go to re-processors and shouldn’t be included in the ‘export’ statistics. A more realistic approach is to look at the domestic waste that is going to landfill from local authority collections.”

Landfill volume in Northern Ireland has reduced over the last number of years. It is welcome news that Councils like Mid-Ulster and Newry, Mourne & Down (NMD) are landfilling the least amount of waste, at 3.6 per cent and 5.7 per cent, respectively. Armagh, Banbridge & Craigavon Council has the third-lowest landfill rate at 6.9 per cent. All three Councils are managing their waste effectively and in line with the waste hierarchy. There, Councils are using the best alternatives to landfill, available at present.

Previous research from the Department of Agriculture, Environment and Rural Affairs suggested that 55 per cent of waste in householders’ black bins could be recycled. Councils sending waste directly to landfill rather than to recycling companies, denies the ability to extract such valuable recyclates. Once landfilled, materials cannot be recovered and virgin products have to be created to replace them, The carbon impact of creating those new materials must be considered.

Mr Doherty argues that; “We shouldn’t be landfilling our waste in Northern Ireland, and we shouldn’t be burying our heads when it comes to waste management, especially when viable alternatives exist.”

“At Re-Gen, we manufacture refuse derived fuel from unrecyclable waste, which we export to combined heat and power plants in Europe. Our plant also manufactures solid recovered fuel, which is used as an alternative to fossil fuels such as coal in cement kilns, helping to preserve natural resources and to reduce emissions.”

These manufactured fuels have a low carbon cost due to the highly carbon-efficient nature of the technologies employed in the plants to recover the maximum amount of energy possible from the fuel.

Currently, Re-Gen recovers more material in Northern Ireland than all other recycling companies and, with current plans, higher levels will be achieved. Their plans for a £30 million circular economy resource park will significantly contribute to the circular economy and the reuse of waste material.

According to Mr Doherty: “We all have a responsibility to recycle as much as we can. Plastics, paper, cardboard, glass and metals are valuable commodities that we can reuse and reengineer to create more of the same products or new items. Keeping these items in circulation, by preventing them from being landfilled, should be our absolute priority.”