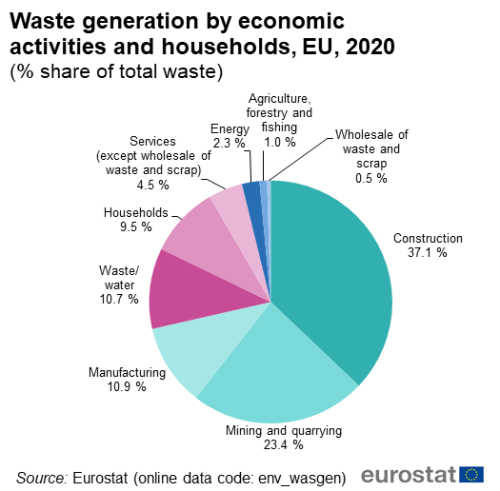 Hazardous waste may pose an elevated risk to human health and to the environment if not managed and disposed of safely. Among the waste generated in the EU in 2020, 95.5 million tonnes (4.4 % of the total) were classified as hazardous waste.

In 2020, some 2,029 million tonnes of waste were treated in the EU. This does not include exported waste, but includes the treatment of waste imported into the EU. The reported amounts are therefore not directly comparable with those for waste generation.

As stated above, in the EU in 2020, more than a half (60.2 %) of the waste was treated in recovery operations: recycling (39.2 % of the total treated waste), backfilling (14.6 %) or energy recovery (6.4 %). The remaining 39.8 % was either landfilled (31.3 %), incinerated without energy recovery (0.5 %) or disposed of otherwise (8.1 %). Significant differences could be observed among the EU Member States regarding the use they made of these various treatment methods. For instance, some Member States had very high recycling rates (Italy, Belgium, Slovakia and Latvia), in others landfill is the prevailing treatment category (Romania, Bulgaria, Finland, Sweden and Greece, see Figure 6).