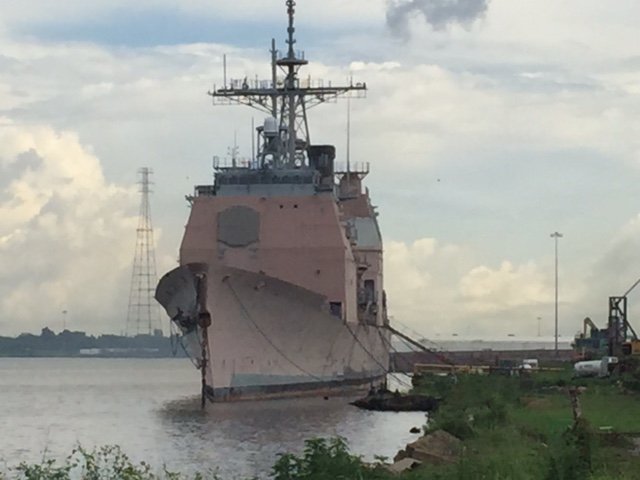 The decommissioned Ticonderoga class cruiser, USS Thomas S. Gates (CG 51), is the only ship in her class to be named after a person and not after a famous American battle. She was decommissioned on December 14, 2005 and laid up at Philadelphia, PA., until she was towed to New Orleans, LA., for scrapping in July 2017.

The metal recycling yard in New Orleans is operated by Southern Recycling, part of EMR. It has taken delivery of a number of US Navy ships including USS Forrest Sherman (DD 931), USS George Philip (FFG 12) and USS Jarrett (FFG 33) in recent years.

Andrew Sheppard, Chief Operating Officer of Southern Recycling, comments, “We were honored to be awarded the contract to dismantle these vessels, which have a history of important service to their country along with their dedicated crew. We have invested heavily in our ship-breaking facilities to ensure that we have the right people, processes and technology to carry out specialist marine recycling contracts in the safest and most environmentally responsible manner. Our goal is to recycle as much of the material from the ship as possible. Metal recovered from Thomas S.Gates will be melted down and repurposed to make new products and who knows maybe even a new US Navy vessel to serve her country.”

The sizeable ship is 567 feet long and 55 feet wide and will take approximately six months to scrap. The dismantling process has already begun.