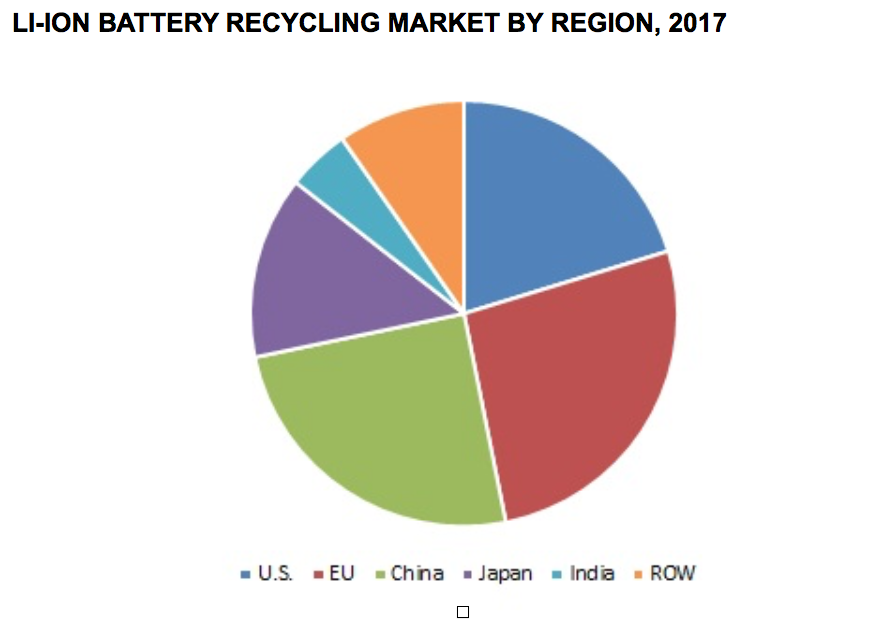 Explicit provision of government initiatives supports growth of recyclers all over the globe
The occurrence of various potential environmental as well as human health impacts of lithium-ion batteries has led the various health authorities to suggest stringent government regulations and policies in order to promote and encourage more recycling and reuse of Li-ion batteries. Various governments have taken initiatives in order to curb these issues. Various governments such as of Germany are promoting people to give their batteries back for recycling. This will also boost the growth of the battery recycling market. Regions such as China and Europe have released regulations on Recycling of Motive Lithium Ion Batteries, owing to the growing community concern about the impact of waste lithium ion batteries on the environment and public health. In Germany, it has been mandated by the law to submit the expired batteries to the designated stores in order to get them recycled. Such trends are helping the major market players to get a strong foothold over the market.

Growing environmental concerns and stringent government regulations led Europe to dominate the global market
European Union is witnessing a rising graph in terms of quantity of lithium-ion batteries being recycled every year. Rising recycling of waste batteries is expected to bring benefits for both the environment and the economy by boosting business and reducing waste. The Battery Directive, setup by European Union in 2006, is responsible for the regulation and recycling of batteries. The Battery Directive was setup to tackle the increasing number of batteries entering the EU market. Approximately 800 tons of automotive batteries, 190 tons of industrial batteries, and 160 tons of consumer batteries of all types enter the European Union each year. The main focus in recycling lithium-ion batteries is the recovery of cobalt, as it has a high economic value and is a crucial raw material for the EU market. The European market held nearly 30% of the global market revenue in 2017. However, countries such as China and India are expected to witness tremendous growth rate in the near future owing to emerging automobile industry and increasing number of waste lithium ion batteries.

Li-Ion battery recycling market by region 2017
Propelling demand for hybrid and e-vehicles might emerge out as a lucrative opportunity for the battery recycling companies   With the increasing demand of fossil fuels by conventional IC engine vehicles and rapidly depleting oil and gas reservoirs, a hike in the R&D of batteries has been witnessed since the last decade. This is a result of growth and demand of electric and hybrid vehicles which have an explicit usage of Li-Ion batteries. According to the statistics revealed by International Energy Agency, transportation sector holds nearly 23% of the total greenhouse emissions. This is actually acting as a stimulating factor for increasing the usage of Li-ion batteries in automobiles which will eventually lead to the increased battery recycling. In India, the commercial use of ISRO made Li-ion battery has been recommended by a government panel for making commercial vehicles. In addition to this, the application of these batteries in various industries such as power and marine is also going to drive the market growth.

More about the report