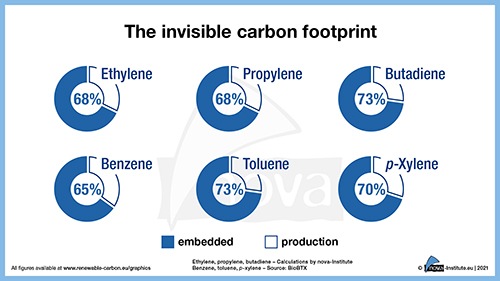 In light of increased efforts towards climate neutrality by 2050, the European Union (EU) is working on the implementation of a so-called carbon border adjustment mechanism (CBAM), which would put a carbon price on imports of certain goods from outside the EU. In our most recent publication, nova-Paper #15 „A Tax on Fossil Carbon is More Effective Than a Tax on CO2 Emissions“, the nova-Institute introduces and discusses the realisation of the CBAM as a tax on fossil carbon. The proposed fossil carbon tax is a simple, effective and elegant tool to achieve the goals of the carbon border adjustment mechanism. It is in line with the ambitious climate goals of the EU and supports both the decarbonisation of the energy sector as well as the transformation of the chemicals and derived materials sector from fossil to renewable carbon.

With the introduction of the European Green Deal in 2019, the European Union committed to achieving climate neutrality by 2050. As a step towards this goal, the first European Climate Law – agreed upon in April 2021 – strengthened the emission reduction targets. In 2030, emissions are to be at least 55 % lower than in 1990. This will put the EU on track for climate neutrality by 2050 and for meeting its Paris Agreement obligations. Quite recently, there has been increasingly vocal support towards the CBAM to create a level-playing field for competitors importing into the internal European market and producing in countries that have set their sights lower than the European Union. In other words, goods imported into the EU would have to bear the same costs for carbon emissions as the ones produced in Europe.

The most frequently suggested option is to tax imported goods according to the greenhouse gases emitted during their production, most often referred to as a CO2 tax. In the new nova- Paper #15, experts from the German nova-Institute present a tool for elegantly pricing the true cause of global warming. A tax on fossil carbon at the feedstock level (called a “fossil carbon tax”) provides several advantages over a CO2 tax as an end-of-pipe measure. Carbon enters the economic cycle through the use of coal, oil and natural gas and is usually emitted as CO2 (after incineration) but can also be released into the atmosphere in other forms, e.g. CH4. With levying a price on fossil carbon, the cause of global warming could be priced elegantly, fairly, and universally.

nova-Paper #15 discusses the advantages of a fossil carbon tax in further detail. A fossil carbon tax solves a number of central issues considered a hurdle for the implementation of a CO2 tax, such as complexity, carbon leakage, eligibility to World Trade Organization (WTO) rules or taxation coverage of all sectors in the economy. The fossil carbon tax can be implemented regionally without endangering competitiveness, as a retroactive taxation or a reimbursement are possible on import and export. With its focus on the raw materials, it is a much simpler approach than an end-of-pipe solution that looks at CO2 emissions. And a fossil carbon tax would not only encompass the energy sector but also cover the chemical and material sectors properly. In these sectors, the demand for embedded carbon will continue to increase in the future, and a fossil carbon tax would be a strong tool to work towards a comprehensive carbon management promoting renewable carbon.

The paper concludes that the proposed fossil carbon tax provides a simple, effective and elegant tool to achieve the goals of the CBAM and that is in line with the ambitious climate goals of the EU. It is easier to implement and control than the CO2 tax covers all sectors that use fossil resources, ensures the continued competitiveness of the European industries, and will have a larger effect on climate change mitigation. All in all, the experts of the nova-institute are strongly convinced that a fossil carbon tax provides better incentives than a CO2 tax to progress from the use of fossil carbon to the utilisation of the three sources of renewable carbon: biomass, CO2 and recycling.

Chemical Recycling Europe has appointed John Sewell as its new Secretary General. Mr. Sewell will take on the position with immediate effect.