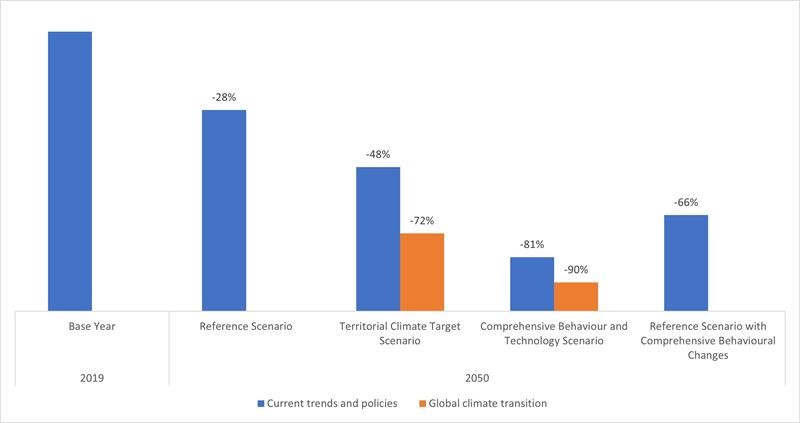 On April 7, the Swedish Cross-Party Committee on Environmental Objectives is suggesting a new consumption-based climate target, as a complement to the existing territorial climate targets. As a basis for this, a group of Swedish researchers, from organisations including Chalmers University of Technology, have produced a comprehensive report analysing how consumption patterns need to change for Sweden to reach emission levels in line with the Paris Agreement’s goal of keeping the global temperature rise well below two degrees Celsius.

The researchers’ conclusion is that while extensive technological developments are essential, consumption habits must also change – only by combining these two approaches do we stand a chance of achieving the goals of the Paris Agreement. The premise in the calculations is that the remaining future emissions are distributed globally evenly per person.

“If we are to achieve really low emission levels, we need to both invest heavily in new climate-smart technologies, as well as make significant changes to our behaviour when it comes to the goods and services with the highest carbon footprints,” says Jörgen Larsson, Associate Professor in sustainable consumption at Chalmers University of Technology, and project manager for the report.

The report is based on analyses of different scenarios and shows that if we rely only on technological developments – measures such as eliminating fossil-fuel vehicles, producing fossil-free steel and fossil-free commercial fertiliser – emissions will still be too high. Only when these technological developments are combined with significant changes in behaviour does the outlook improve – particularly if the changes are substantial.

When combined with fewer flights, less car travel, significantly reduced consumption of beef and dairy products, and radically reduced construction of roads and housing – for example by converting office blocks to residential buildings – emissions could sink by up to 90 per cent by 2050, compared with today’s level. This reduction of emissions is based on the assumption that the rest of the world also enacts climate change mitigation measures to meet the goals of the Paris Agreement, thereby reducing the carbon footprints of imported goods.

“The scenario with extensive behavioral changes is a theoretical thought experiment, which aims to show the lowest levels we could reach with the help of both technological and radical social changes and still live a modern life.” says Johannes Morfeldt, researcher at the Division of Physical Resource Theory at Chalmers University of Technology.

Analyses based on five distinct scenarios

The report, which is based on Swedish conditions, outlines scenarios with varying degrees of technological development and behavioural changes.

The Reference scenario foresees behaviours and technology evolving according to current trends.

Behaviour and technology scenario – in addition to the technological changes in the previous scenario, further measures are implemented (both technical and behavioural) to lower Swedish consumption impacts outside of Sweden’s borders as well. (not pictured in the diagram)

Comprehensive behaviour and technology scenario – extensive reductions in flying, driving, consumption of beef and dairy products, as well as in the construction of new roads and housing.

Reference scenario with comprehensive behaviour change – the same reductions in consumption as in the previous scenario, but without the introduction of advanced technologies, both in Sweden and abroad.