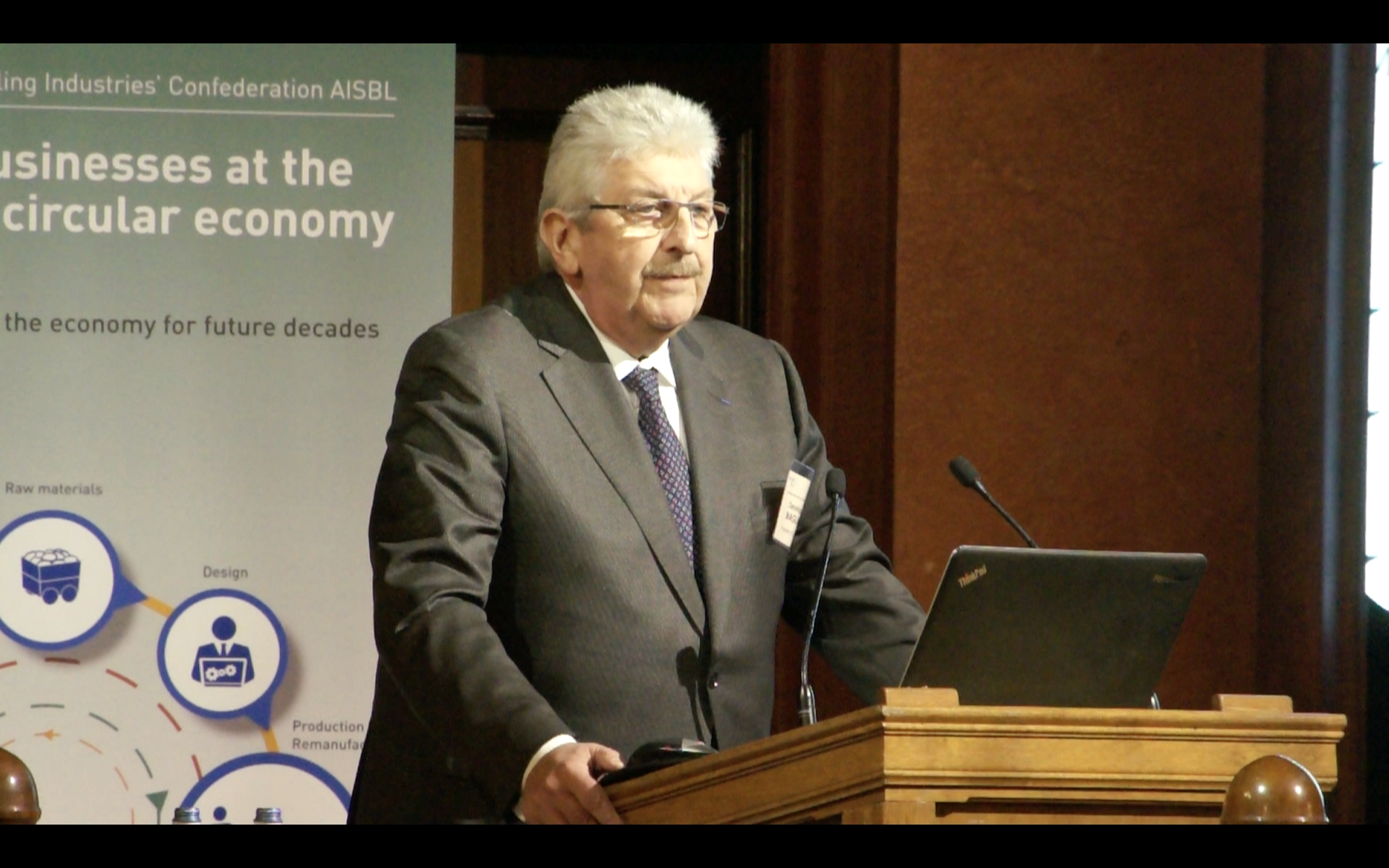 At a time of growing Euroscepticism, recyclers do not call for less Europe – in fact, they call for more Europe, and particularly better Europe, to make the circular economy happen.

Euric President Dominique Maguin acknowledged the role the EU waste hierarchy already plays in fostering recycling, emphasizing that “at a time when the European Commission proposes to shift towards a circular economy, the recycling sector is paradoxically enduring a major crisis. Record low commodity prices render recycling of a number of streams uneconomical”. He stressed the “urgent need to strengthen the package with pull measures which value the environmental benefits that recycling brings to the economy and society”.

This plea was strongly echoed by industry leaders Christer Forsgren, Stena Recycling, Henry Saint-Bris, Suez Environnement and Graeme Carus, European Metal Recycling (EMR). All called for financial incentives to balance the cost gap between primary and secondary raw materials or stressed the need to green public procurement to ensure that taxpayers’ money supports the shift towards a circular economy. Through such measures, Europe can continue to lead by example against global competitors, such as China, which are moving towards 0% VAT on Secondary Raw Materials to attract recycled material.

Julius Langendorff, Deputy Head of Unit Waste Management & Recycling, DG Environment of the European Commission stressed the potential benefits of the Commission’s proposal to reduce landfill and incineration while acknowledging the practical difficulties of setting up market incentives. Ruben Dekker from the Dutch Presidency of the Council and Members of the European Parliament, representing the European legislative branch, stressed their steady commitment to make of the adoption of the circular economy package a priority.

Miriam Dalli, Member of the European Parliament (MEP) stated that “a booming global population and finite resources, the need to shift to a low-carbon, sustainable economy, where as little as possible is wasted, is an evidence”. This implies cooperation at all levels and with all actors, a view which was equally shared by Cilian Lohan, the Rapporteur of the European Economic and Social Committee (EESC).

Concrete matters that impact recyclers’ daily activities were also at the heart of the debate. Sirpa Pietikainen, MEP, a pioneer in advocating the ‘paradigm shift’ implied by the circular economy, stressed the importance of ensuring that investment opportunities are made accessible to SMEs. Rainer Cosson from the German Steel Recyclers’ Association, BDSV, made the case for better enforcement of existing legislation throughout the internal market, which is equally important to small and large companies as it levels the playing field for all.

Similarly Hans van de Nes, from the recycling SME Melosch, emphasized the visionary spirit of a number of recycling businesses, created by entrepreneurs more than a century ago. Their request: a well-functioning, barrier-free, internal market for secondary raw materials supported by a simplified framework for resource shipments. A very telling case study of why simplified resource shipment procedures are urgently needed was provided by Chris Slijkhuis, from the Müller-Guttenbrunn company, who advocated for fast-track Waste Shipment Notifications to solve issues that affect the entire sector.

Dirk Vandenberghe, Eurometaux President, joined the call for an effective and proportionate regulatory framework on hazardous substances and recycling, to avoid penalising EU recyclers and to boost quality recycling. Fulvia Raffaelli, Acting Head of Unit in charge within DG Internal Market, Industry, Entrepreneurship and SMEs of the European Commission, emphasized the importance of strong ties with recycling industry practitioners while acknowledging the specificities of secondary raw materials markets.

Stephane Arditi, from EEB, gave some insights into eco-design, another key component of the circular economy which ensures that new products can be easily reused, repaired and recycled. In the concluding session, Ranjit Singh Baxi, BIR President, emphasized the importance of free trade for recyclers, as recycling is a global industry. Dr. Dominic Hogg from EUNOMIA presented the case for a long-term EU-wide resource tax to enhance the commercial logic of circular business models and increase the use of secondary materials.

Daniel Calleja-Crespo, Director General of DG Environment, closed Euric first Annual Conference by stressing that the European Commission keeps its promise to deliver a more ambitious package on a number of aspects which will benefit inter alia the recycling industry, “which provides an excellent example of how environmental, economic and social elements can work together.”

One step closer towards a truly circular economy

ENVI gets positive feedback for vote on circular economy package

Bioplastics in a circular economy